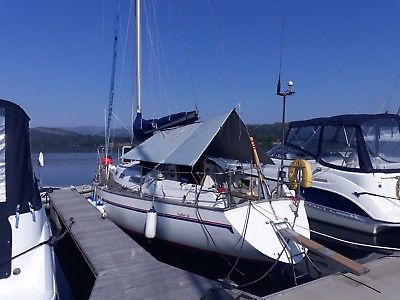 I have for sale my beloved yacht Bonsella. Unfortunately, a bad back and lack of interest from my family means that she has to go. In her life she has sailed as far as Greece, but in the last few years she has been on Windermere. The Sadler archive describes it as:”The Sadler 34 was designed in 1983 by Martin Sadler, as a bigger replacement for the Sadler 32, which was a 1979 design by David Sadler, in turn intended to improve on his earlier Contessa 32 design. With this lineage, the Sadler 34 is inevitably a fast, seaworthy yacht, with vice-free handling. The hulls are filled with rigid polyurethane foam between an inner and outer moulding, rendering the hulls unsinkable.”Bonsella has the deep fin keel option.She will comfortably sleep six people although I am told that she was originally  designed for 9!She comes with:mainsail (2014) with lazyjack rigginggenoa on roller reefingStaysailcruising chutesprayhooddodgersteak deckVHF radioautohelm (untested)two burner stove with oven and grillFridgechemical toiletpressurised  H & C water systemBukh diesel engine (goes well but will need some maintenance)Lots of other bits and pieces.I have a survey from 2 years ago (for the insurance). At present she is based at a marina on Windermere, where she has been lifted out for the last three winters. There is a full boat cover that was new in 2016. The fees have been paid until next April. If you wish to keep the boat there then a separate arrangement over costs will have to be made.She is ready to sail, but could do with some TLC (like all older boats).

This Sadler 34 Sailing Yacht boat is located in Windermere, LA23 1LP and is being sold on eBay by phil61052.